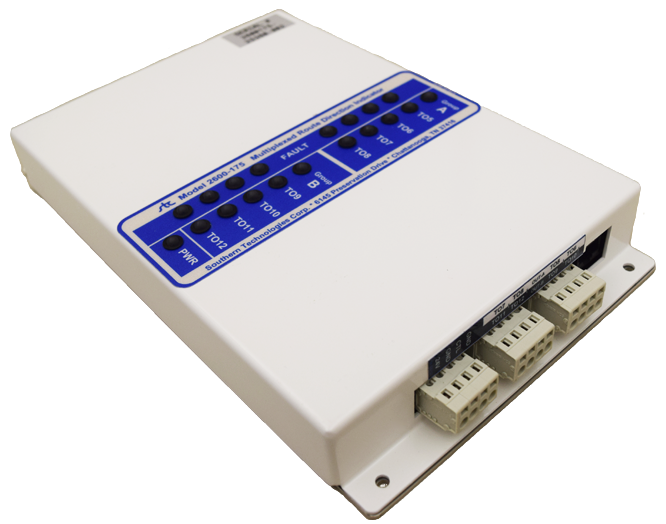 The MRDI is a panel mounted accessory for the 2600 Series AEI system.   It is used in industry track or yard applications to enable the 2600 AEI Reader to provide route tracking information for vehicles that are moved to or from multiple available tracks, as determined by an adjacent track switch or switches.

The 2600-175 MRDI module is typically used at industrial plant entrances, or at storage yards, where rail vehicles get routed to/from multiple tracks as they are delivered to or retrieved from the property.  With the MRDI module installed, the Model 2600 AEI system can report vehicle movement in terms of the route taken and the direction traveled.  The MRDI's multiplexed inputs provide for up to four switched routes to be monitored.

When equipped with an MRDI module, the 2600 is able to sort out complex switching moves into collections of the vehicles delivered to, and those retrieved from, each of the available routes.  The 2600 AEI Reader's software also provides for configuring the Reader in terms of:

The MRDI utilizes WAGO connectors for interfacing both to the 2600 Reader and to the wheel detectors installed on the switched routes.  The LEDs on the cover of the MRDI reflect the current status of the connected wheel detectors and of the device's multiplexer function.