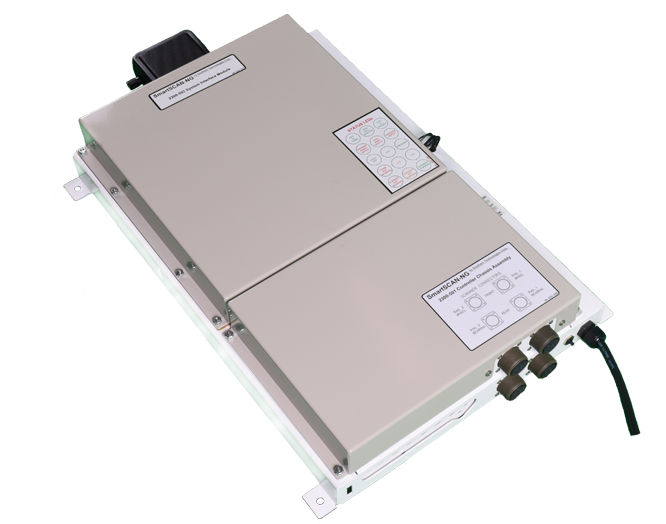 The system electronics, consisting of a chassis assembly and a Controller Module, contain all the surge suppression and interconnection hardware to fill the requirements of a full-featured defect detection system.

Once alarm conditions are detected, they are clearly announced on a pre-selected VHF radio channel to alert train crews to the presence of dangerous conditions. Defects are identified by axle number and position in real time. The Controller Module can provide remote data reporting over an IP network.

The Model 2300 system is modular by design, allowing the system to be configured as needed for specific environments. The basic system is delivered as a Hot Bearing Detector. Additional capabilities can be added by simply attaching input devices, such as wheel scanners, a dragging equipment detector, high/wide load detectors, and the MPRR–RFID module. The system software of the Model 2300 NG already contains support for each of these options — merely adding the hardware required for the desired function and activating it in the software enables these capabilities.

The Model 2300 NG system is designed to seamlessly integrate data from a TransCore® MPRR - RFID Reader Module. The addition of an MPRR reader module enables the system to include car identification information, including Owner Codes and Car Numbers, in defect alarm announcements and train reports.  Also, the car identification information can be used by the system's Velocity module to generate S-9203A and S-9203B reports. In the event of a detected defect, alarm announcements delivered over the radio will include the car number with the defect. The NG system maintains records of the last 100 trains that it has scanned. The records can be delivered over an IP network or copied to a local PC through a serial connection and viewed in a standard ASCII text format.

Bearing and Wheel Temperature: The Model 2300 NG² system supports input from Type II and Type III infrared scanners manufactured by Southern Technologies Corporation.  Both types of scanners are compatible with the same rail mounting hardware and can support either bearing or wheel scanning interchangeably.  Each delivered system includes most of the tools required for system maintenance, including alignment and calibration.

Ambient Temperature Measurement: The Model 2090-100 Temperature Probe is a plug-in module that provides an ambient temperature indication for an STC defect detector system.

Wheel Detection: The Model 2100-596 Dual Gating Transducer with Clamp Assembly is a rail‑mounted device that generates wheel detection and timing signals for an STC defect detector.

TRANSCORE is a registered trademark of TC License, Ltd.